RECONSTRUCTION AND MEDIATION OF THE MUSIC FROM THE VIKING AGE

From the vantagepoint of a strong academical foundation created through a large music-historical, -archeological, – and -anthropological, culture-historical, and music theoretical research and analytical work, we create reconstructions of the music of the Vikings. The project is developed in close cooperation with Maria Ojantakanen from Vikingelandsbyen Albertslund and we are currently working on creating more collaborations, in Denmark and abroad.

We wish to give our take on how the music would have sounded in the world of the Vikings: in their everyday life, in battle, in rituals and at celebrations. The goal is to deliver a creative academically founded contribution to musical reenactment, so it continues to grow as an active and important part of the growing tradition within living culture-historical mediation. Our product is an interactive performance which is adjustable according to whether we are making it in collaboration with schools, museums or performing in concert halls.

A TAKE ON BUILDING AN ANCIENT MUSICAL STRUCTURE

Our musical and compositional work is largely based on the possible soundscapes, timbres and tone images one can create on instruments from the Viking age. We primarily work with the ones discovered in Scandinavia, but also to some degree with instrument findings in Great Britain. In our composition-process we are furthermore guided by possible scales used at the time (pentatonic and dorian); written contemporary sources from merchant travellers, who visited the North; tales about instruments and music found in sagas and myths; and the few examples of written music from the time immediately after the Viking Age.

We only work with instruments that have been found in archaeological excavations, or those we have a strong enough reason to belief, could have been in use. We also want to make a point of demonstrating and explaining how the soundscape of the Vikings could have varied from the modern day way of thinking about harmonic, rhythmic and melodic structures. The music of the Viking Age was to a large degree improvisational. Most of the music was likely created spontaneously through play in situations of either pastime, work, war, rituals and such, and assumed its musical form thereafter. Therefore, the aesthetic of music now and then might be very different. We also draw inspiration from the relatively unbroken lines of Scandinavian folk music, on either Iceland or in the Faroe Islands, and to some degree in Sweden.

REENACTMENT AS A METHOD IN OUR RESEARCH AND COMPOSITION

In the quiet hours of the morning we send out the ”kulning” over the open waters off the coast of Orø, and by night we yield ourselves to the inspiring light of the moon; drum, bell and flute in hand. Here the music we will present for you was born.

In short, we seek to create a take on a musical structure which we then live with and set in motion in the reenactment-world of the Vikings. To be able to create a soundscape, or musical piece that bears as much of the soul of history as possible, we believe that it is crucial to live in the frames the music existed in.

COLLABORATIONS AND THE PROJECT IN AN INTERNATIONAL PERSPECTIVE

We have great ambitions with this project, and want to make it a fine contribution to the work and research within ancient music. We are currently riding a wave of strong fascination with the values, traditions, culture and mythology of the Vikings, a fascination that has only grown stronger over the years, and hope to find more collaborators in both within the Danish and international cultural life.

As mentioned earlier Maria Ojantakanen from Vikingelandsbyen is an important collaborator, and we are currently planning to reach out to all the major cultural institutions, who are working with Ancient Scandinavian culture. Among these are The Danish National Museum, Moesgaard Museum, Sagnlandet Lejre, Trelleborg and Foteviken in Sweden. 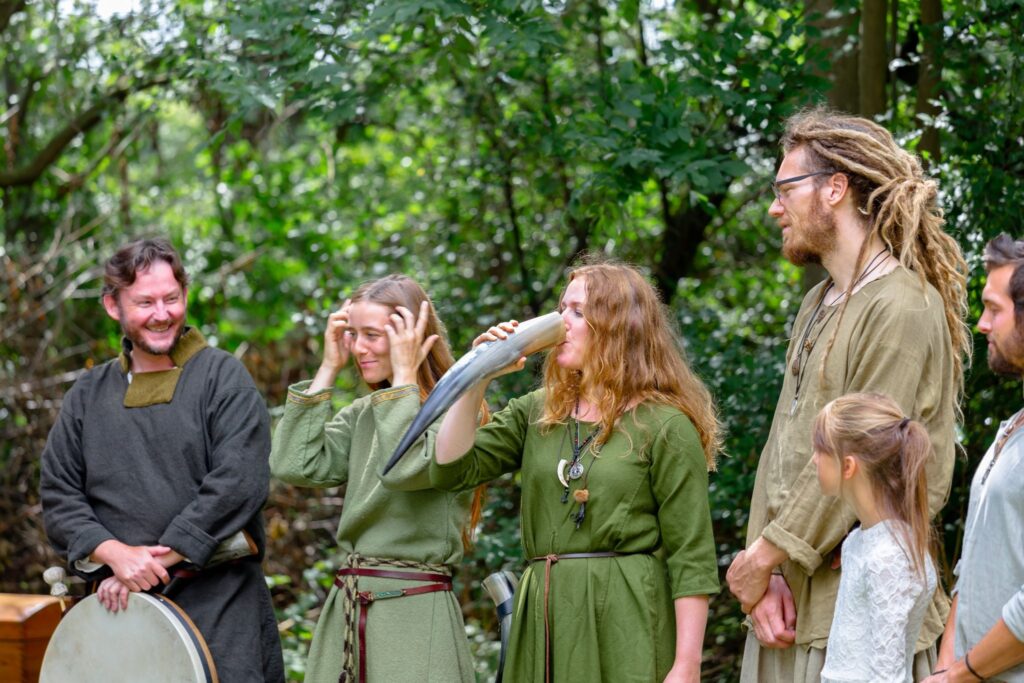 WHAT DO WE OFFER YOU?

Since reenactment is such a large part of our composition-process, method and research, we wish to give a small presentation explaining our thoughts, workprocesses, and the musical framework that we work within and present some of our original music. Our contribution is a presentation interspaced with performances of newly composed music based on the presented findings. The talk/performance will take about 30-45 minutes, depending on the timeframe you are able to give us. We hope you will find interest in our project, and we look forward to hearing back from you.